The Speech and Language Service is currently accepting Request for Help calls from anyone who has concerns about a child or young person’s speech, language and communication needs. On completion of a Request for Help conversation with a Speech and Language Therapist, we are offering early help, advice and information; we are also accepting children and young people for any specialist level assessment and following intervention if appropriate. We aim to see children within 18 weeks; we currently have a longer wait due to changes in service from the impact of Covid-19.

If you have concerns with regards to any child or young person with speech, language and communication needs, please contact the service on 01752 434844.

Learning to communicate with others is one of the most important skills we develop. Unfortunately, it is common for some children to experience difficultly with speech and language as they mature.

Our friendly speech and language team is experienced in helping children who have difficulty speaking clearly, expressing themselves, communicating socially, understanding others, talking fluently, or feeding and swallowing.

We use fun games, images and new words to help your child with their listening, talking and sound-making skills.

Our open help system means if you are concerned about a child’s speech or language development, and they are living in Plymouth, you can request help from us for assessment. Please be aware, we can only consider request for help forms that have parental consent. 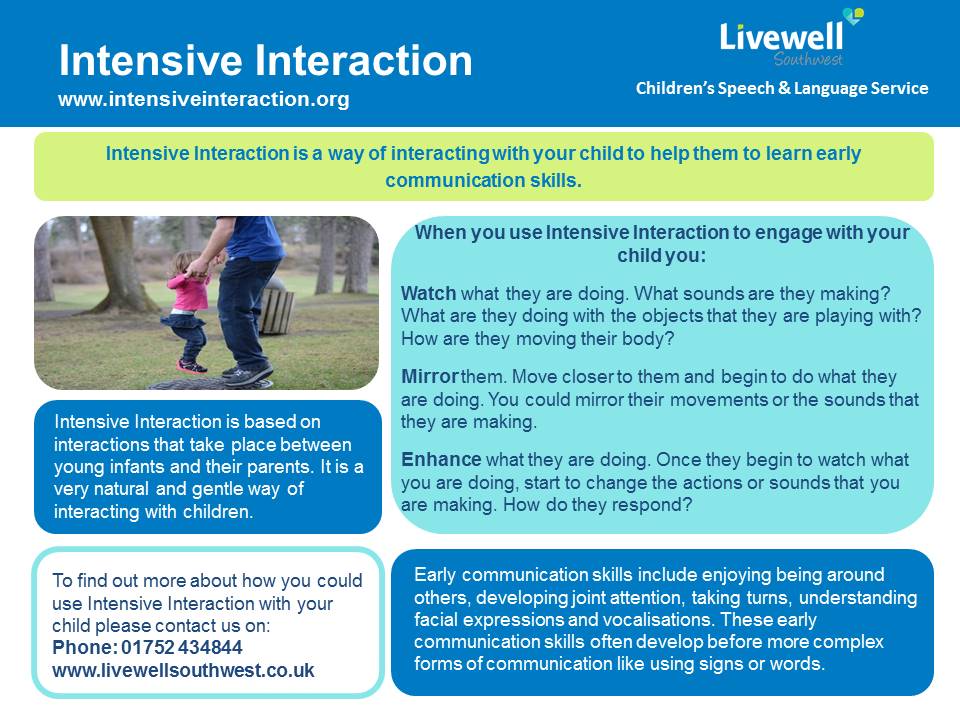 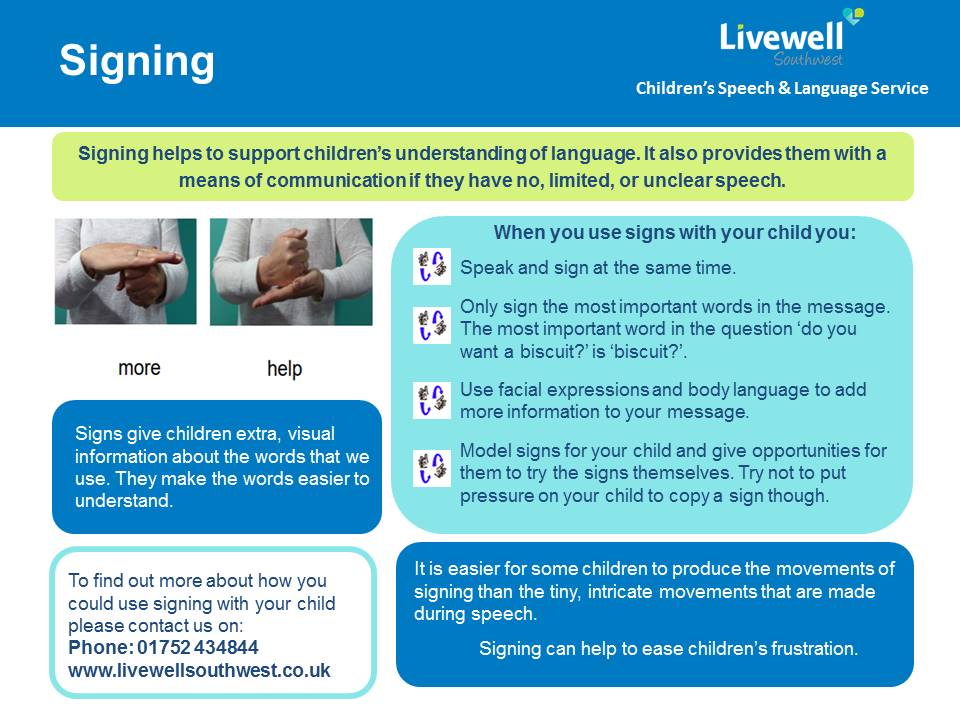 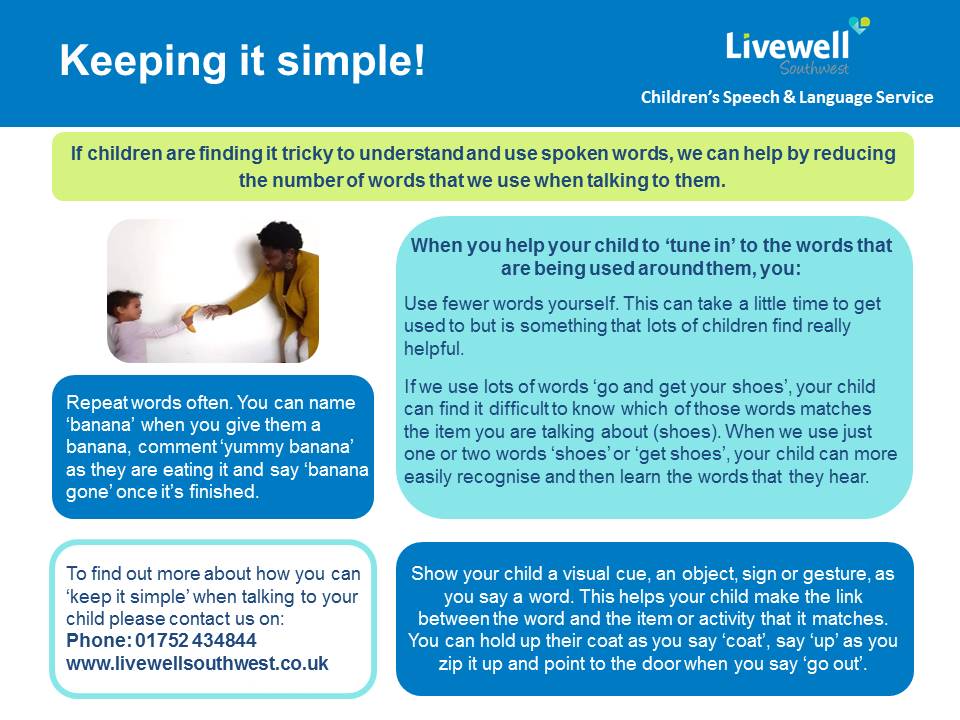 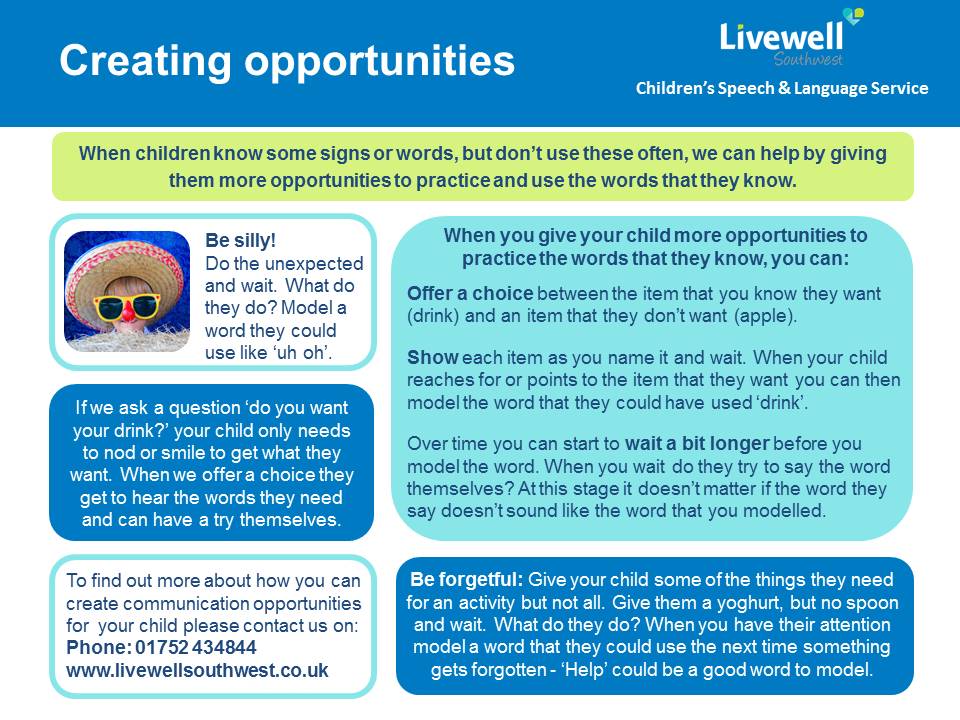 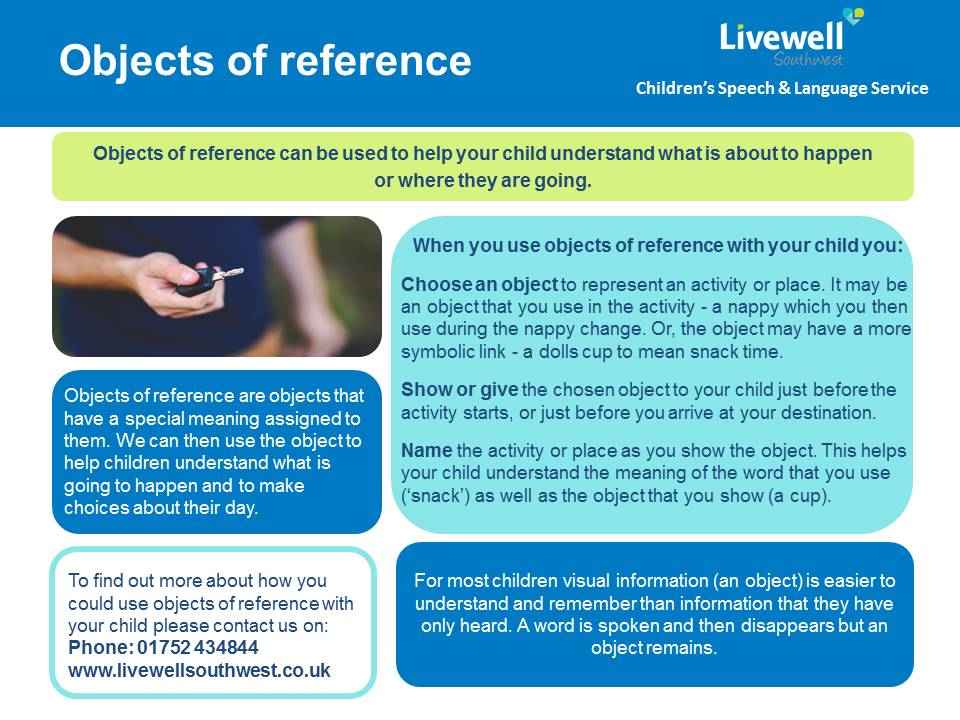 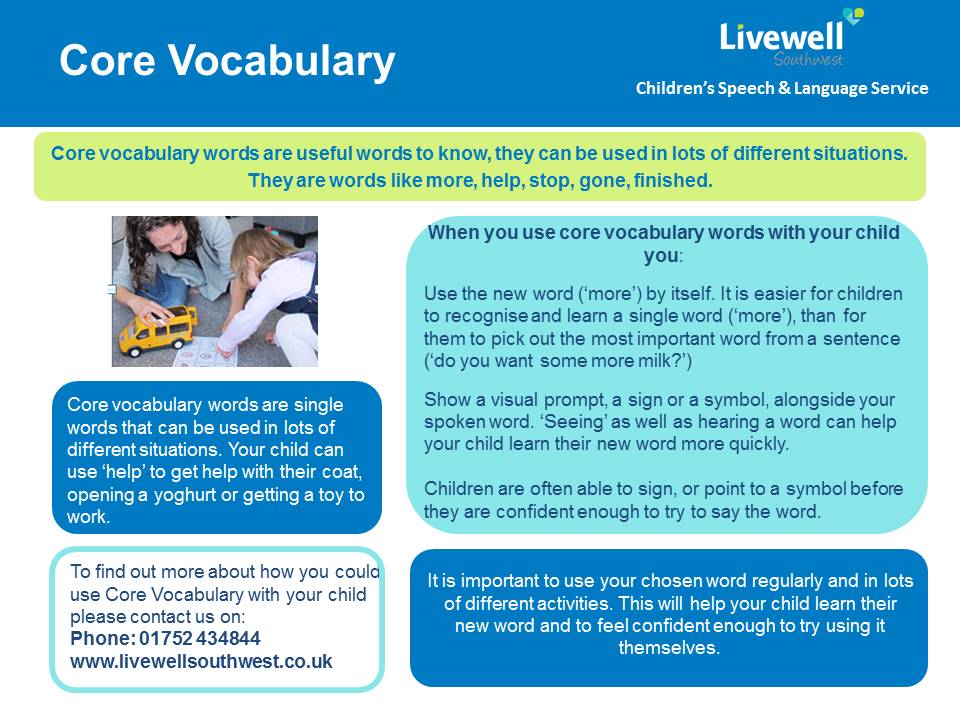 Cued articulation is a series of hand gestures to support a child who is having difficulty with their speech sounds. A child who has speech sound difficulties can often get confused as to when to use their new sound; even if they are able to imitate that sound in isolation.

Once you’ve had an explanation from a speech and language therapist, you may find the following videos useful as a reminder of the strategy:

As children are learning to talk their speech sounds develop gradually over a period of time, and it’s normal for them to make some errors as they learn to say new words. As a rough guide, children’s speech should be understood about 50% of the time at age two and 75-100% at the age of three.

Sometimes children do not master the sounds we would expect by a particular age and as a result their speech can be unclear and difficult to understand. Often they can make progress with support and practice but sometimes their difficulties can be longer lasting.

There may be a number of reasons why speech sound difficulties occur.

Developmental Language Disorder (DLD) is a condition where children have problems understanding and/or using spoken language. There is no obvious reason for these difficulties, for example, there is no hearing problem or physical disability that explains them.

This results in children who have difficulty understanding what people say to them, and struggle to articulate their ideas and feelings. DLD can have a significant impact on progress at school, or on everyday life.

In the past DLD was known as specific language impairment (SLI) but recently the name has changed so that it better reflects the types of difficulties children have.

Autistic Spectrum Condition (ASC) is a lifelong developmental condition. The word spectrum is used because although those with ASC share similar difficulties they may be affected in different ways. The main areas of difficulty which all people with AS share to varying degrees are:
Difficulties with Communication
A lack of desire to communicate.
Poor non-verbal communication such as eye contact.
Difficulty interpreting the non-verbal communication of others.
Superficially good spoken language but poor conversational skills and social awareness.
Lack of language and speech.
Excessive echoing of language used by another person.
Pedantic or very specific language.
Lack of tone in voice and interpreting meaning from others tone of voice.
Difficulties expressing feelings and emotions.
Difficulties with Social Interaction
Limited interaction with others.
Being interested in others to have their needs met
Showing some affection but on their terms.
Lack of motivation to please others.
Poor understanding of social rules and cues.
Socially isolated but not worried about it.
Difficulties with Imagination
Using toys as objects, for example focusing on the wheels on a toy car but not the car itself.
An inability to play imaginatively or think creatively.
Difficulty learning sequences of play.
May insist on certain routines and become resistant to change.
Repetitive play.
Learning things by rote but with limited understanding.
following rules rigidly and not allowing exceptions.
Associated patterns of behaviour.
Extreme responses to sensory stimuli, e.g. noise / light / textures.
Difficulty with attention.
Difficulties eating, drinking, sleeping.
Difficulties with mood changes and understanding their emotions.
Increased anxiety in new situations.
Challenging behaviour.

Hearing difficulties can affect development of all or just some areas of speech and language, depending on the type and severity of the deafness.

Hearing impairment can vary from mild through to profound. The National Deaf Children’s society explains the difference between the two main types of deafness as:

Sensori-neural deafness, or nerve deafness as it is sometimes called, is a hearing loss in the inner ear.

Conductive deafness means that sound cannot pass through the outer and middle ear into the inner ear. This is often caused by blockages such as wax in the outer ear or fluid in the middle ear (glue ear).

Many children with conductive deafness are unable to hear certain speech sounds clearly, which in turn, affects their ability to say the words clearly. They may also have problems listening and concentrating, so their general language development may be delayed as well.

If you have concerns about your child’s hearing ask your health visitor or GP to refer them for a hearing test.

Learning to talk, like learning to walk, is never completely smooth and does not happen straight away. Young children often stop, pause, start again and stumble over words when they are learning to talk. Between the ages of two and five years, it is normal for a child to repeat words and phrases, and hesitate with “um”s and “er”s, when he is sorting out what to say next.
Many find it easier to talk fluently as they get older. Others continue to find talking difficult and often get stuck.

What is stammering
You may notice your child

These examples vary from child to child – you may hear some or all of these when your child talks.

It is not known exactly why a child stammers; it is likely that a combination of factors is involved. There is no evidence that parents cause stammering. It is about four times more common in boys than in girls. Stammering often runs in families and occurs worldwide in all cultures and social groups.

How is fluency affected?
Whatever the age of your child, there are things he / she is able to do easily and some things which he / she finds difficult. Your child’s fluency may change according to;
Stammering may come and go; you may notice his / her speech is fluent for several days, weeks or months at a time, then he /she stumbles and speaking becomes difficult again.

‘Drooling’ and ‘dribbling’ are different names for the same thing, which is when saliva, drool or dribble escapes from the mouth usually as a result of the child not swallowing often enough.

If your child begins to drool, encourage them to dab around their mouth with a tissue NOT wipe. Dabbing will help to reduce drooling but wiping encourages more drooling.

Speech and Language Therapists will see infants and children who have eating, drinking and/or swallowing problems (dysphagia). This might be as a result of  physical or mechanical feeding difficulties and there is a higher incidence of swallowing difficulties with people with learning difficulties.

Once your child has been seen by a  Speech and Language Therapist, they will make make recommendations to support your child’s eating and drinking. These recommendations may include: messy food play; texture development; positioning of your child or the use of different utensils or ways of feeding.

Please note that we do not provide a service to children or young people who:

Children who have English as a second language should not be regarded as having a speech and language difficulty.

Even children who have had limited exposure to English before going to school can become competent communicators in the new language.

As with all referrals to Speech & Language Therapy, a hearing test should be considered.

Strategies recommended by a speech and language therapist can be used both in a home language and a new language. 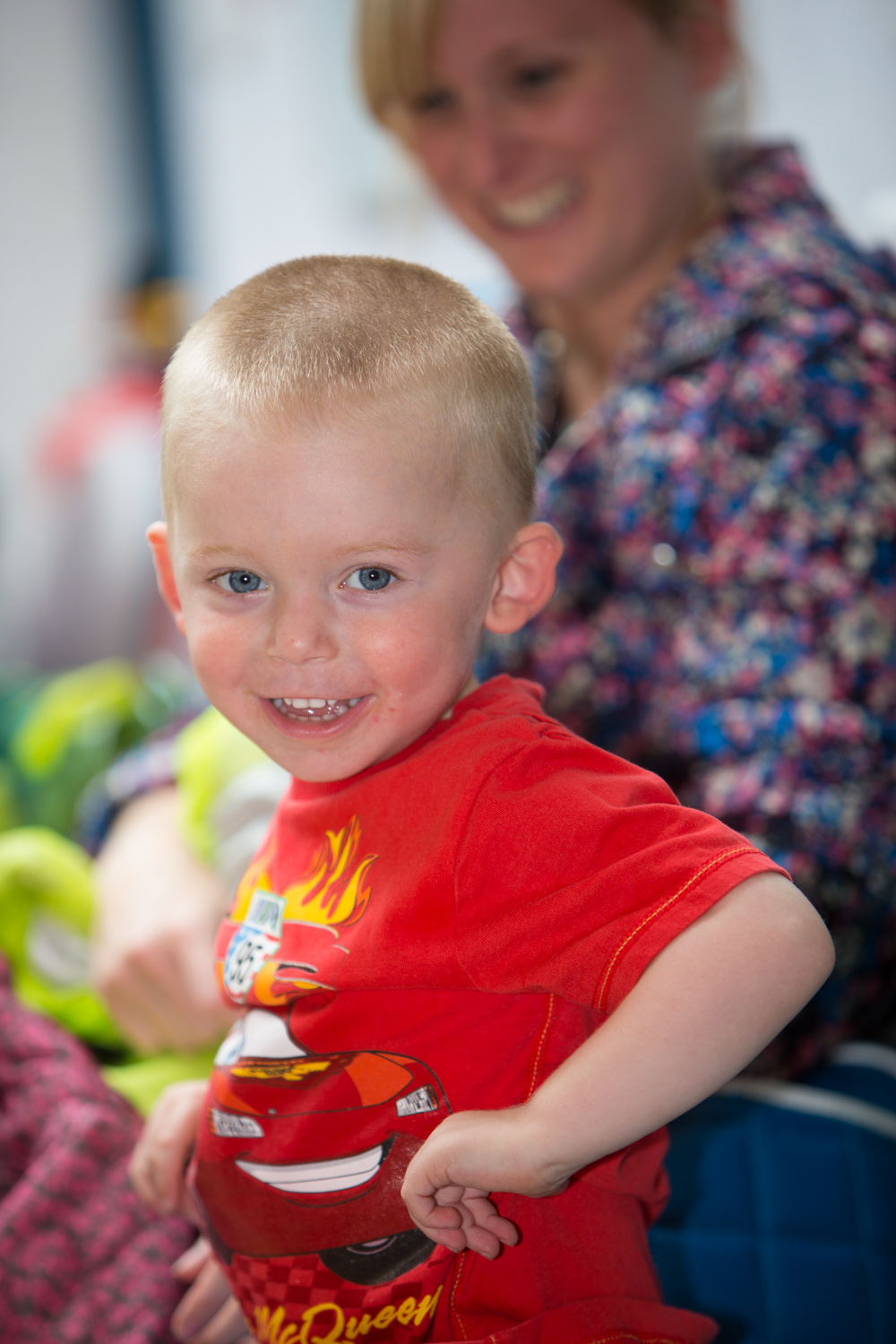 As children are learning to talk their speech sounds develop gradually over a period of time and it is normal for them to make some errors as they learn to say new words. As a rough guide children’s speech should be understood about 50% of the time at the age of two and 75-100% at the age of three.
Sometimes children do not master the sounds we would expect by a particular age and as a result their speech can be unclear and difficult to understand.  Often they can make progress with support and practice but sometimes their difficulties can be longer lasting.
fa-

Speech, language and communication skills underpin all key subjects throughout the school curriculum and beyond. Good early language skills play a crucial role in
Research has demonstrated that children starting school with poor or reduced language skills do not have the tools to access the next stage of learning, may struggle with friendships and may have low self confidence.  Good foundations of attention and listening skills and play skills
promote on-going development of understanding of language, speaking in longer sentences and speech skills.
fa-

Speech, language and communication development is a gradual process. Children develop skills at different rates, but beyond 8 years, usually children will:

The importance of play

Information for parents and health professionals

Association for Research into Stammering in Childhood

Talk To Your Baby

We would be grateful if you would complete a survey based on your experience of this service: Friends & Family Test

For general enquiries, or to be directed to a specific service or individual, please contact our switchboard on 01752 268011.

See what others have said about our service – click here.