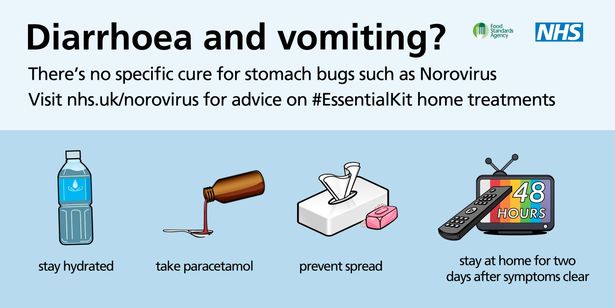 With reports of outbreaks of Norovirus increasing at schools, hospitals and nurseries across the South West, Livewell Southwest is joining Public Health England and NHS England and Improvement in urging people to follow simple steps to stop the spread of this nasty bug this winter.

Norovirus can live on hard surfaces for hours and spreads very quickly through environments where lots of people are mingling closely. The best way to protect yourself and others from catching this unpleasant sickness bug is simply to wash your hands thoroughly with warm water and soap, and to keep the environment you live and work in clean.

Alcohol or antibacterial hand sanitisers are a popular choice for people wanting to protect themselves from the bugs that circulate during winter, causing illnesses such as norovirus. However, what most people don’t know is that hand sanitisers are NOT an effective protection against this common sickness bug.

Norovirus is a highly contagious stomach bug that causes diarrhoea and vomiting. Most people will recover within a few days and can return to work or school.  However, if Norovirus is introduced unintentionally into places where lots of people congregate, such as schools, nurseries, hospitals and care homes, the illness can spread incredibly quickly and affect vulnerable people.

In some situations, Norovirus outbreaks can lead to hospital ward or school and nursery closures. This can have a knock-on effect of disrupting peoples’ jobs, routines or putting the health of people with underlying conditions at risk.

It’s so simple to play your part in stopping the spread of Norovirus this winter – just Think NORO:

N – No visits to hospitals, care homes and GP surgeries if you are suffering from symptoms of Norovirus – send someone else to visit loved ones until you are better

O – Once you’ve been symptom-free for at least 48 hours, you’re safe to return to work, school or visit hospitals and care home

R – Regularly wash your hands with soap and warm water, especially after using the toilet, and before eating or preparing food

“Levels of norovirus are increasing in line with expected levels so far this winter but many schools, nurseries, hospitals and care homes across the South West have reported outbreaks in recent weeks.

“The symptoms of norovirus include suddenly feeling sick, projectile vomiting, and watery diarrhoea. Some people also have a slight fever, headaches, painful stomach cramps and aching limbs. The symptoms appear one to two days after you become infected and typically last for up to 2 or 3 days.

“Anyone who has been infected should stay off work or school for 48 hours after their symptoms have ceased.”

“We’ve already seen a number of clinical settings affected by norovirus ahead of winter, and unfortunately instances like these are likely to rise over the coming months as the temperature drops.

“If you are feeling unwell, have diarrhoea or vomiting; please don’t visit a hospital for at least 48 hours after the last symptom has gone. Norovirus can have a serious impact on patients who are often more vulnerable to catching it.

“Self-treating at home is the best way to help yourself and avoid putting others at risk. You don’t normally need to see your GP as usually fluids and paracetamol to relieve pain, as required, are sufficient prior to its resolution – antibiotics won’t help because it’s caused by a virus.

“If you’re concerned, the NHS 111 service is a helpful alternative to presenting to your GP in person for advice.”

Hospitals across the South West remain very busy due to winter pressures but there a range of simple steps which people can take to stay well and avoid having to go to A&E. These include: