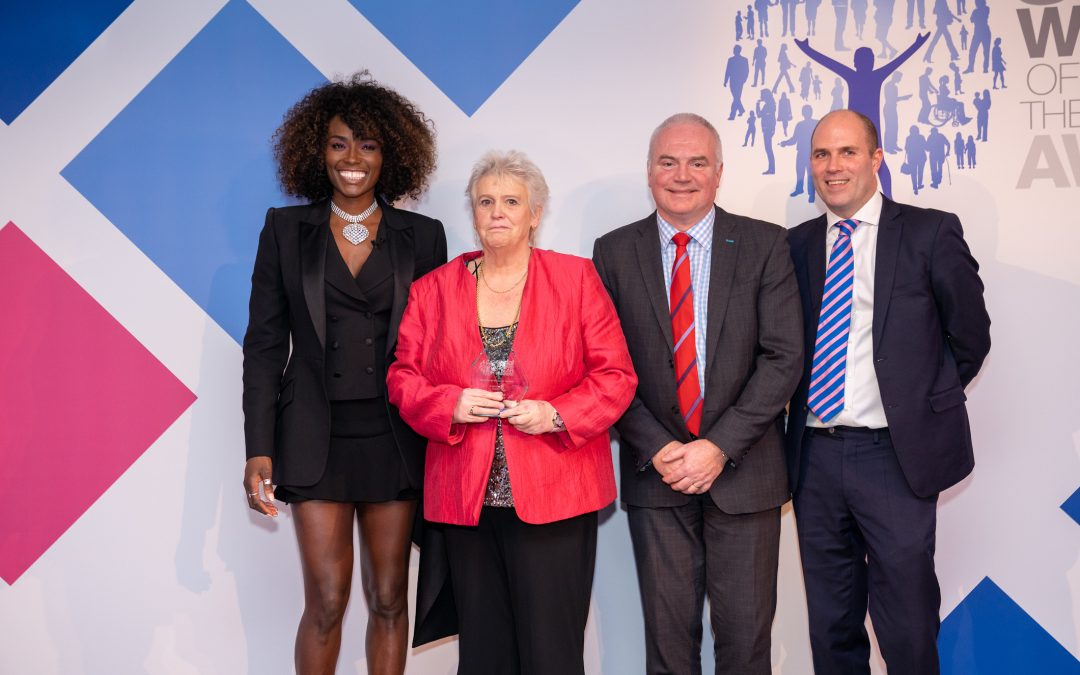 A Plymouth social worker who has dedicated more than 40 years of her life to the profession has been named as Adult Social Worker of the Year at a prestigious awards ceremony.

Teresa Barrett, adult social worker at Livewell Southwest, won the accolade at the annual Social Worker of the Year awards on Friday, 29 November.

Livewell Southwest is the social enterprise delivering health and adult social care in Plymouth with social workers working across different teams to support people including mental health, in safeguarding and on hospital wards.

The Social Worker of the Year awards were founded in 2006 with the aim of improving the understanding and reputation of the profession.

Teresa has worked as a social worker in Plymouth since 1981 for Plymouth City Council and Livewell Southwest in various roles but her social work values have always been embedded in all the roles she has undertaken.

Outside of work she runs a youth club and volunteers in a monthly soup run and is credited by colleagues as an “asset beyond measure”.

She said: “It’s so humbling to have won this award; I’m still in shock at being picked as the winner when there are so many amazing social workers out there.

“I absolutely love my job. It’s an honour to support people with their goals and help to support them to remain independent.

“Being a social worker is all about putting the person at the centre of what we do and supporting them to meet their needs and that’s what I try to do every day and what I’ll continue to do until I retire.”

The judging panel described Teresa as a ‘hugely skilled and experience social worker’ who ‘truly lives the values of social work’.

James Bouch, Sales Director at award sponsor Servelec, said: “Congratulations to Teresa on winning this award. Her social work career, and the positive changes she has made for people living in her community, is nothing short of inspirational. She is a very deserving winner.”

Dr Adam Morris, Chief Executive at Livewell Southwest, said: “I am absolutely delighted that Teresa has been recognised at the Social Worker of the Year Awards.

“Teresa has dedicated her life to supporting others with their goals and she truly embodies the value of social work.

Craig McArdle, Interim Strategic Director for People at Plymouth City Council, added: “I’m really pleased that one of Plymouth’s social workers has been recognised for this prestigious award.

“To be recognised as the national adult social worker of the year is a fantastic achievement and everyone at Plymouth City Council is incredibly proud of Teresa. Social workers help make a difference in the lives of some of our most vulnerable residents.”

As well as Teresa’s win, Hannah Creasy who works in Livewell’s safeguarding team won silver in the Newly Qualified Social Worker of the Year category and the West Devon Community Health and Social Care team in Tavistock, provided by Devon County Council and Livewell Southwest also won silver in the Team of the Year, Adult Services category.

Hannah said: “Being nominated and shortlisted for this award was a huge honour so to win Silver and having seen some of the feedback has been amazing.

“I have been fortunate to have had great support personally and professionally throughout my journey and feel proud to be a part of a profession full of people who strive to make a difference.”

Teresa will now be invited to attend a special Parliamentary Reception at the House of Commons in the spring to celebrate her achievements with representatives from the Department of Health and Social Care.