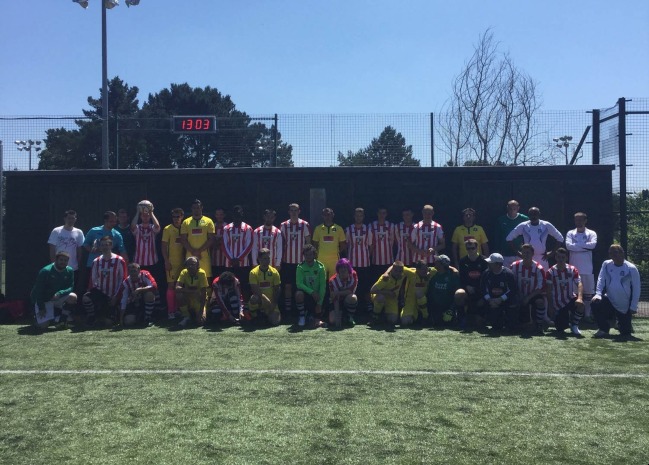 A therapeutic project aimed at tackling mental and physical health through football is continuing to thrive during the COVID-19 pandemic.

It’s A Goal is a joint enterprise between Livewell Southwest and the Argyle Community Trust – official charity for Plymouth Argyle Football Club.

The project has been successfully running for more than 13 years and uses football analogies as a way of getting people to talk openly about their mental health difficulties.

It’s part of Livewell’s successful STEPS community service, which supports people with a range of problems through community and group activities including the It’s A Goal programme, psychoeducational group programmes and the CROP horticultural therapy.

Rob Jackson, mental health nurse at Livewell who runs the sessions, said: “There’s still a lot of stigma around men accessing mental health services and even more so when we originally set the programme up.

“In non-COVID times each session is held at a football ground, everything is as non-clinical as can be because we know that this can be a barrier for also people accessing mental health support.”

Each session lasts for 90 minutes – the same length as a football game, with a half-time break and groups run for a thirteen-week season.

“Everyone has a long-term goal to work towards which is decided by them and it could be anything from understanding their mental health better, increasing social interaction or cutting down on alcohol for example,” said Rob.

“Our aim is to try and improve people’s communication skills and confidence. A lot of the people we support through the programme are lacking in self-esteem and are often isolated or cut off.

“Each week we have a smart match goal and go around the group to discuss how people have found the past week and how they’ve been trying to achieve that goal.

“We discuss if people have struggled and bring it back to football reminding people that on the pitch you wouldn’t just go from one end to other. Sometimes you have to make a series of passes and sometimes that might mean passing back and everything is a series of passes.”

Each week, the session is focused on a different topic and theme, exploring the emotions and psychology behind each theme, allowing people attending the session to reflect back on their own situations.

As well as the 90-minute therapeutic session, people in the group also have the option of playing football together after – although this has had to be put on hold during lockdown.

Rob added: “The football match afterwards has been really popular with those attending the group and it’s a really great way to support people’s physical health as well as their mental health so it’s a really holistic approach.

“Even after people have completed their sessions, they still come to take part in the football, and we’ve built up a really great little community.

“We even have some people who have successfully completed the programme come back and volunteer to support others. It’s amazing to see the progress they make from being in quite a dark place to thriving and wanting to coach and support others.

“We’ve got some set rules when we do play football including no slide tackling and ensuring we’re kind to each other on the pitch because some people can be really anxious about joining and we’ve got a real mix of ages and abilities.

“Unfortunately, this has had to stop during lockdown as have our face-to-face sessions, but we still meet virtually each week.”

Although originally aimed at reducing suicide rates in men, the programme has grown in popularity and supports women too.

“We’ve had several women successfully complete the programme and although many of them were quite anxious when they initially join, watching the way they’re supported by others in the group and seeing the trust and bonds made is amazing,” said Rob.

“The programme is very relaxed, everything we do at STEPS is recovery based and taken at each individual’s pace, nothing is prescribed or forced and if anyone would like to find out more, they’re very welcome to contact me.”

Mickey from Argyle Community Trust, who has supported Livewell with the programme since the beginning, said: “it is honestly amazing to see all the people’s journeys and see them developing through socialising and playing football.

“It is so easy going, inclusive and for all abilities. It’s great to see what they do in the group and how it translates to the football session. They may have different issues but they come together and talk and support each other in a fun and social environment.

“I have loved every minute of working with Livewell on the It’s a Goal programme and I am so proud to have played a part in it.”